Sorry for the small picture, I'm sure the music night at Taverna Panorama in Milatos, every Friday night will be a big success. I'll let you know when I have been there.

Posted by Jane Sharp at 2:21 PM No comments:

My friend Jan reading the prayer for the athletes at the Olympic games in London, when the flame came to Agios Nikolaos on its way around Greece before heading for Britain. I think she did very well. The dancers too were excellent!
Posted by Jane Sharp at 7:02 AM No comments:

Meeting of the Environment Committee of the Region of Crete

The story of CRETE TV on yesterday's meeting of the Environment Committee of the Region of Crete about the proposed hydro-electric dam planned for Azilakodasos (The Oak forest) between Vrahassi and Krasi. As you can see the locals are not at all happy, and why should they be. Their land is about to be snatched from them, the total beauty of the place with be ruined, not to mention the destruction of the natural habitat of the Griffon Vulture and other wild birds and animals.
Posted by Jane Sharp at 2:35 PM No comments:

Night Out in Sissi

Tonight David and I went out with friends to dine in Sissi. It was a thoroughly enjoyable evening, and we had lovely food at the Fisherman's Hook (Agistri) on the harbour. Unfortunately there were not many people out, maybe it was due to the weather, or maybe it is still early in the season, but Sissi was not buzzing. It could also have been because people had stayed in to watch the football. Whatever!

I did get to talk with a very interesting Greek gentleman about the fight to stop the construction of wind turbines, and a hydro-electric dam in the hills between Vrahassi and Krasi. He was very optimistic that this could be accomplished. This is good news, and I only hope that all goes well with the struggle to keep this land as natural as possible.

The rain today brought cooler temperatures but I think it is typical for May. June will come blazing in before we know it, and hopefully bring more tourists to help the businesses remain solvent. So, tomorrow I will start to prepare for summer and get the garden furniture out ready for painting. As for tonight, it is just past midnight and time for bediebies.

Have a good weekend everyone,

The new prime minister is Panayiotis Pikramenos, chief judge of the Council of State.

And there will be another general election on June 17th.

Local News - Yesterday, a 77 year old woman was robbed of 46,000 euro which she had just taken out of the National Bank in Agios Nikolaos.

Posted by Jane Sharp at 5:53 AM No comments:

What if Greece Exits Euro?

Viewpoints: What if Greece exits euro? 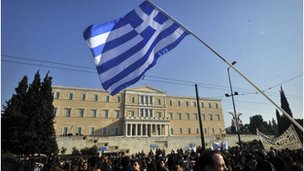 If Greece left the euro, inflation and unemployment would probably rise
Greek politicians are struggling to form a new government.
There are powerful factions that do not want the austerity measures imposed on Greece by its international lenders.
But unless Greece can satisfy the demands of the European Union and the IMF, then they will cut off Greece's last remaining lines of credit.
Without that, Greece will not be able to pay its bills and could drop out of the euro altogether.
Below are the views of several experts on what would happen if Greece were to leave the euro.

Chaos. Greek banks would go bust. Greek companies would go bust. Unemployment would go up. The new drachma loses lots of value.
Food and energy prices go through the roof. It would be an explosive cocktail.
The turmoil would weigh on growth. The outlook for the eurozone would worsen.

The drachma would be devalued by at least 50%, causing inflation.
Interest rates will have to double and all mortgages, business loans and other borrowing will become much more expensive.
There will be no credit for Greek banks or the Greek state.
That could mean a shortage of basic commodities, like oil or medicine or even foodstuffs.
A lot of Greek firms rely on foreign suppliers, who may cut off Greek customers. Greek companies could be driven out of business.
Greece will lose its only reference point of stability, which was its euro status.
The country would end up in a volatile period. There would be institutional weakness.
The worst case scenario would be a social and economic breakdown, perhaps even leading to a totalitarian regime.

I think that either the Greeks or European policy makers talking about an exit in a casual blase way are being highly, highly irresponsible.
Total cost versus the total benefit remains overwhelmingly negative, both for the eurozone and Greece.
In one shot, a Greek exit could undo a large part of good work in Ireland and Portugal.
If you are a Portuguese saver with money in the bank, even if there is a small likelihood of losing that money, it would make perfect sense to move euro deposits while you can to a safer haven, like the Netherlands and Germany.
There would be a significant deposit flight in peripheral countries.
It would immediately weigh on investment in the real economy, because corporations would be very reluctant to invest anything at all.

You would see cascading bank defaults in Greece and everybody would take money out of Portuguese and Spanish banks.
A big part could be plugged by the European Central Bank (ECB) through a liquidity operation that would backstop the banks.
The ECB has already done that several times and it would step up to the plate again.
But that would not stem the political contagion or unrest. We have seen four elections in two weeks. In Greece, France, Italy and Germany, electorates have voted against austerity at home.
However, Greece is a small country and the rest of the eurozone has been making provision for this for a long time now.
The eurozone could survive a Greek exit. Depending on the choreography, the exit could be better for everyone involved if managed in a co-ordinated orderly way.
But if it were done by a unilateral default, an exit would be a worse option for Greece.

In the currency market, we are already seeing money fleeing to safe havens.
The alternatives are few and far between for those who want to stand aside from the euro.
The dollar is performing relatively well. The dollar index - the dollar against a basket of other major currencies - is at the highest level in two months.
A new drachma would not be the most widely trading currency in the world and would probably drop in value by 50%.

What everyone is missing is a third possibility.
If credit is withdrawn by the EU and IMF, then Greece becomes a cash economy. It means the government can only pay what it collects.
The government starts shutting down, 10-15% of state employees don't get paid and unemployment surges from 20% to 30%.
But Greece can still use the euro.
It would be difficult for the ECB to keep banks afloat. The Greek banking sector would collapse as well.
That would cause more unemployment, as credit for companies would dry up.
What happens next is a political question.
European nations would probably not accept another Western European country descending into chaos and collapse.
The EU and IMF would probably negotiate some kind of aid. But Greece could continue with the euro.

Posted by Jane Sharp at 3:05 AM No comments:

My progress after three and a half years of study. I am looking forward to improving - onwards and upwards, as they say.

I'm just back from our Poetry Club meeting, we are still trying to establish a group, but today we did get a couple of visitors.

And now I'm going to relaxe for an hour before having a sort out in the back garden.

Byeeeeeee! Jane x
Posted by Jane Sharp at 4:20 AM No comments: 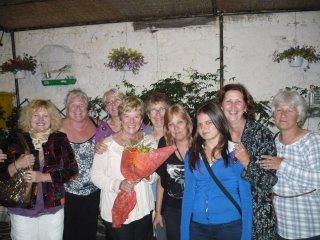 Rosemarie's birthday was celebrated in style last night. We all enjoyed a good girlie natter while we stuffed with food and the odd glass of wine in Latsida. It was a lovely night out, whose birthday is it next? (Thanks for the picture Lydia).

And today was another wonderful day in the company of friends at Fourni, where we had a little music soiree. (Pictures later)

Poetry club tomorrow in Neapolis - life is on the up! God knows the political news is depressing enough, I think it is best to just sit back and wait for the crash, then just ride with it when it comes. All this newspaper stuff is doing my head in. I need space to create, move over all things to do with the euro and Europe, I feel joyous words clamouring to be expressed!

According to a report in the Vrachasi Blog, work will begin to fix the harbour wall at Sissi in the next few days.


This is a short translation from the blog:

About cleaning the harbor Sissi inform our readership that became the 3.5.2012 auction, which was attended by two contractors.
There was some objection, so the successful contractor is Mr. Dimitris Atsalakis.
Hopefully in a few days will start to clean and will not go elsewhere tourist boats ...

Jane x
Posted by Jane Sharp at 1:33 PM No comments: 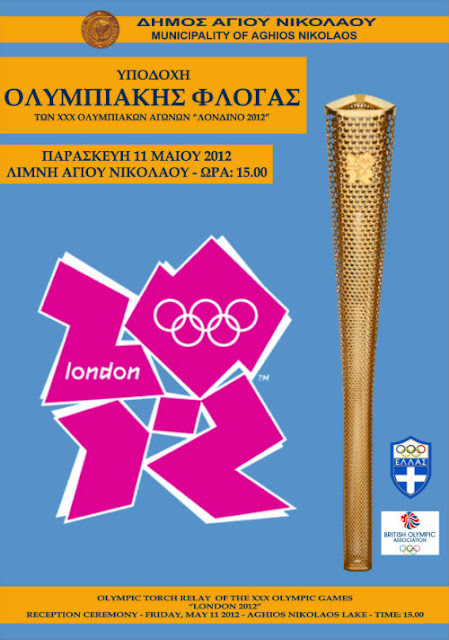 Posted by Jane Sharp at 1:12 PM No comments:

Posted by Jane Sharp at 5:43 AM No comments:

The Odd Poets of Crete 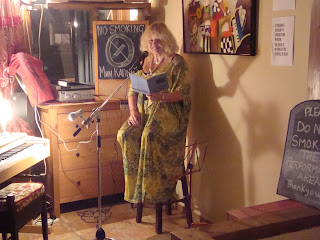 I'm feeling resurrected! I still have the dress, still got the mike, and plenty more poems to share. And now I have company too. I am pleased to announce that The Odd Poets of Crete officially met last week to discuss poets and poetry, and we shall be gearing up for a reading pretty soon. So, if there are any interested poets out there who would like to join us, come to Driros cafebar in Neapolis on Monday morning at 11 a.m. Bring some of your work, or a poem which you particularly like.

Posted by Jane Sharp at 8:14 AM No comments:

MAGIC! And it is! Though have you any idea how much time has been spent by all of these musicians to reach this state of excellence? God how I would like to be involved in such a recording! Well, keep practicing Jane!

I did intend getting out there to pick wild flowers today, but watching this video has made me all the more determined to kick ass with Valentino. Get to those scales Jane, cellos don't play themselves. And anyway, it's a bit chilly outside.

Speaking of outside, looking out of my window I can see a man on a roof fixing a water system for a neighbour. In the street his mates are preparing to barbecue. Hm... maybe I will go out after all, I've a couple of chops in the fridge, and half a bottle of...STOP! See the big picture gal, SCALES.
Okay, it was just a thought. Hope you enjoy the video as much as I do.

Have a lovely Mayday wherever you are.
Love Jane x
Posted by Jane Sharp at 2:38 AM No comments:

TEARS FROM THE SUN - A CRETAN JOURNEY by Jane Sharp

Or you can order below from Amazon.com for American & International orders:
Tears from the Sun: A Cretan Journey

IT'S A BEAUTIFUL DAY - CHEERS!